【The Taiwan Constitutional Court in a New Era】

The amended Constitutional Court Procedure Act (CCPA) is scheduled to take effect on January 4, 2022. This amended CCPA will expand the jurisdiction of the TCC, revise its organization and administration, and initiate a new designation and format for the decisions of the TCC, among other major changes. The CCPA of 2022 adds a new type of litigation, i.e., constitutional complaint against the final court decisions, to the jurisdiction of the Taiwan Constitutional Court (TCC), and enables the TCC to exercise a power of concrete review on top of its abstract review powers. It is expected that the caseload of the TCC will increase significantly in the first several years after 2022. Meanwhile, the CCPA of 2022 will establish a new Chamber system, each consisting of three Justices, to dismiss a petition without the deliberation of the full house. The decisions of the TCC will also change their designation from the current “Interpretation” to “Judgment” for those decisions on the merit, and from “Resolution” to “Order” for a dismissal. Accordingly, the TCC will issue its Judgments or Orders along the format of the decisions adopted by other courts in Taiwan.

The History of the CCPA

Soon after its establishment in 1948, the Council of the Grand Justices, Judicial Yuan, adopted the “Rules of the Council of Grand Justices” as its first rules of procedure. In 1958, the Legislative Yuan (the Parliament) adopted a new stature, the Council of Grand Justices Act, to replace the said Rules. In 1993, the Legislative Yuan amended and renamed the said Act to be the “Constitutional Court Procedure Act.” This amended Act, among other revisions, added a new jurisdiction regarding the dissolution of unconstitutional political parties and mandated the holding of public hearings and the issuance of judgments in the name and format of a Constitutional Court, on such cases. In 2019 the Legislative Yuan overhauled the said Act of 1993 into a new “Constitutional Court Procedure Act,” which is scheduled to take effect in January 2022.

Key Changes in the New CCPA

The amended Constitutional Court Procedure Act (CCPA) will take effect on January 4, 2022, including the following features:

Table of Contents of the New CCPA

Chapter V. Impeachment against the President and/or the Vice President

Jurisdiction and Types of Proceedings

Comparisons between the Old and New CCPA 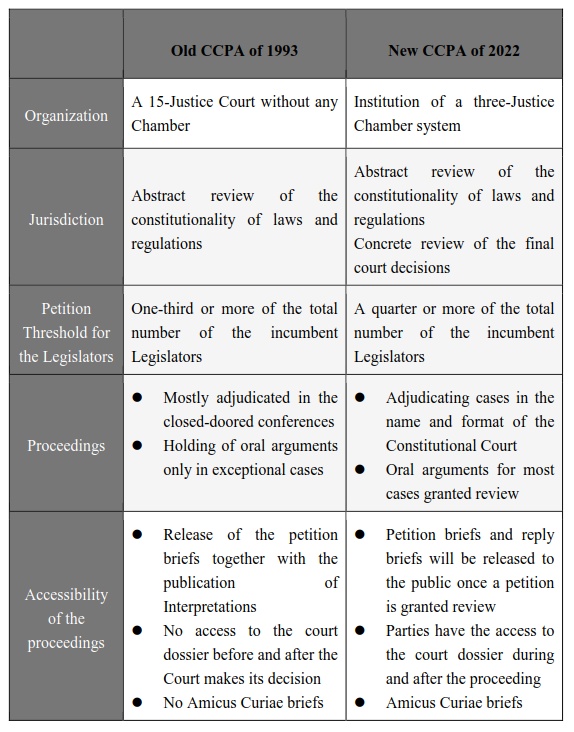 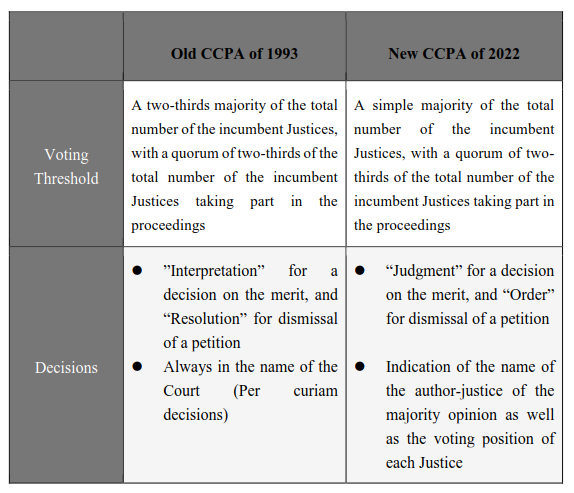