▍Detention Affairs in the Administrative Litigation

Personal freedom is an essentially fundamental human rights that the government cannot abridge without due process of law and shall be guaranteed to its greatest extent. Under Article 8 of the Constitution and Article 9 of the International Covenant on Civil and Political Rights, the personal freedom shall be guaranteed. In addition, The J.Y. Interpretation No.708 interpreted that the government shall provide the detainee with prompt judicial relief in the event that National Immigration Agency orders a temporary detention of a foreign national for a reasonable period in order to be forcibly deported. Moreover, an extension of the aforementioned temporary detention also shall be subject to judicial review. The Administrative Litigation Law was amended and promulgated on 18st June 2014 and the Immigration Act was amended and promulgated on 4th February 2015, both Acts become effective on 5th February 2015. According to the J.Y. Interpretation No.710, “Act Governing Relations between the People of the Taiwan Area and the Mainland Area” and “Laws and Regulations Regarding Hong Kong & Macao Affairs” have been amended on 17th June 2015 and become effective on 3rd July 2015, the preceding protection shall also apply the residents in Mainland, Hong Kong and Macao area.

The amendment to Administrative Litigation Law adds a new Chapter “Process in Detention Affairs” in order to follow the approved amendments to  Immigration Act、Act Governing Relations between the People of the Taiwan Area and the Mainland Area、Laws and Regulations Regarding Hong Kong & Macao Affairs. In that Chapter, it stipulates that the types、the court  jurisdiction、the adjudication and ruling of the detention affairs. Detention is divided into three periods as follows: Temporary detention (up to 15 days); Continued detention (from 16 to 60 days); Extended detention (from 61 to 100 days). If the detainee from Mainland area, it is possible to extend the detention (from 101 to 150 days).

Detention affairs are divided into four types: Objection against the temporary detention order、Continued detention、Extended detention 、Revocation of detention. The temporary detention is made by the National Immigration Agency, any detainee or his/her spouse, blood relatives may file an objection against the temporary detention order to the National Immigration Agency. If it doesn’t agree with the objection, the detainee shall be presented in court within twenty four (24) hours. If a detainee is detained for fifteen (15) to sixty (60) days or over sixty (60) days, prior to the deadline of the temporary detention and whether it is necessary to continue the detention sanction, the National Immigration Agency shall apply for a continuation of the detention period by submitting the reasons to the court no later than 5 days before the deadline. If the continued or extended detention is permitted by the court since the detention order is no longer valid, unnecessary, or refutable; the continued or extended detention order shall be revoked by the request of the detainee 、his/her blood relatives, and the detainee would be released. The action relating to detention affairs is designed to be concluded in the second instance. With regard to matters concerning detention affairs, the jurisdiction to hear the first instance belongs to the administrative court of a District Court for the place of the domicile of the detainee. The detainee may file an appeal against the ruling of the administrative court of a District Court to High Administrative Court.

The Administrative Court provides that the detainee with a prompt and effective judicial relief to temporary detention. The Immigration Act、Act Governing Relations between the People of the Taiwan Area and the Mainland Area、Laws and Regulations Regarding Hong Kong & Macao Affairs also provide that the organ making the arrest or detention shall, within 24 hours from the time of judicial relief request, turn the detainee over to a competent court for trial whether detention should be rightful and necessary. 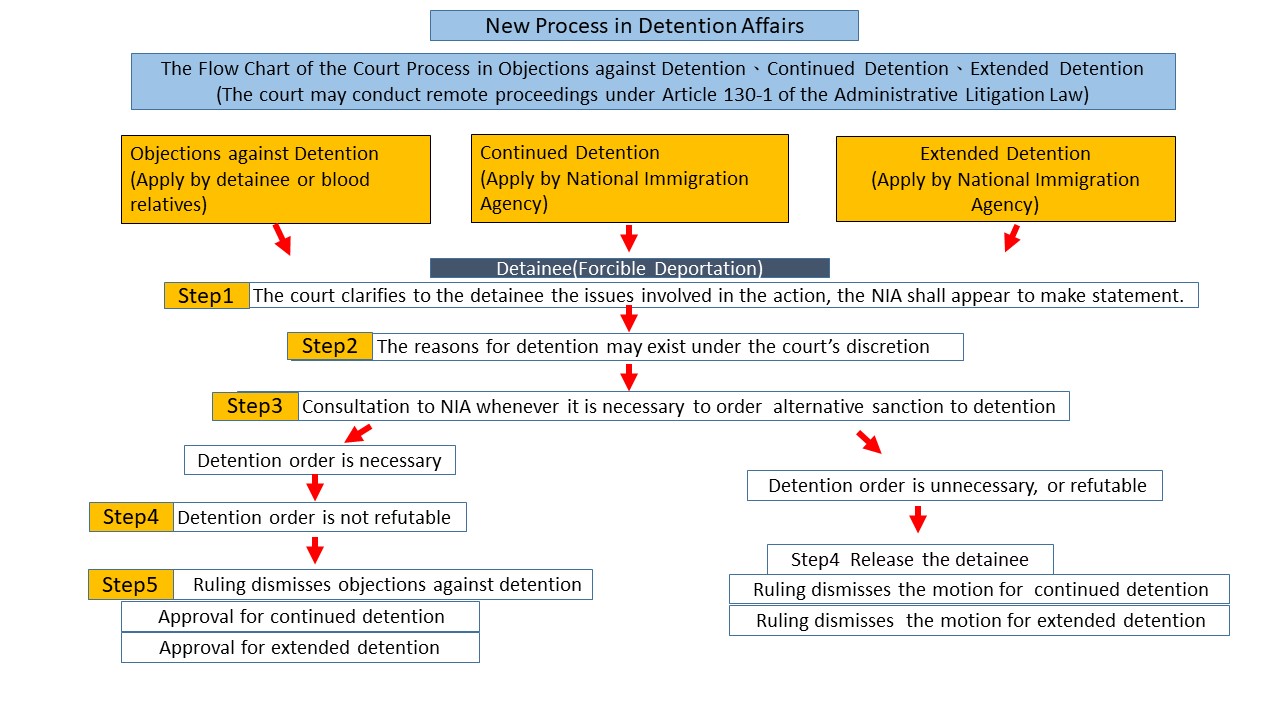